Jacob wrote, “during WWII [t]he Nazis made armbands with a piece of white cloth and stenciled blue star; and you had to buy it. I don’t remember how much it cost, but you were required to wear it at all times out of your house, so you had to buy it. The Nazis called the armbands with the Star of David, ein schander flecken, or badge of shame. They wanted to identify who was Jewish and make us feel ashamed of our identity, but my father said to my sisters, ‘You are all professional embroiderers, so we are going to wear this armband embroidered; not the kind that you buy from the Nazis pre-printed. We are going to follow the law as to the size of the Star and the color, but we are going to beautifully embroider it, and we are going to call it the badge of honor.’ My father, my sisters, and I, all wore embroidered arm bands. They were never dirty or crumpled up because my father insisted that our armbands be cleaned and pressed. He wanted to instill pride in us, and as far as I was concerned, it was a great idea. It sounded right to me. That idea of Jewish pride and the iconic Star of David left a big impression on me as a child and it has continued through my adult years. Immediately after the war, I commissioned someone to knit snow mittens for me with a similarly styled blue Star of David, and I usually include that stylized star in all my graphic designs I create for various publications. I will always remember what my father said.” 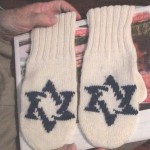 After the war, Jacob had a woman in Germany make him these mittens.His desire to have the Star of David on them reveals that he did not abandon his Jewish faith and what his father taught him 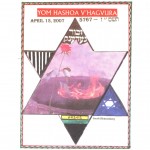 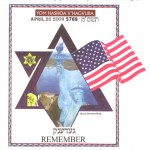 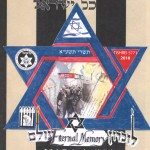