All paintings are by Jacob Hennenberg and Oil on Canvas unless otherwise noted.

If you have a painting of Jacob’s not shown here please email us at JacobHennenberg@gmail.com  We would love to have a copy and can have arrangements made to photograph it in your home possibly if need be. 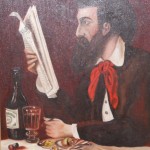 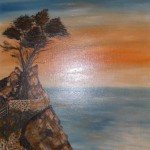 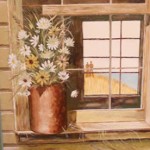 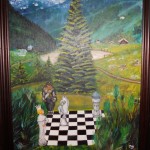 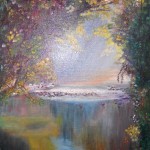 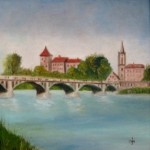 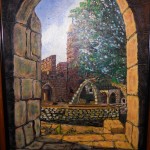 NOW–THEN: NEVER AGAIN, 2014 Acrylic on canvas by Mollie Goldman Grade 9, Fuchs Mizrachi School The artist writes, “This painting describes the perspective of a young boy who survived the Holocaust. The smaller hand is his younger self, overlaid on top of the hand of his older self. The background also symbolizes the present and the past. The bright stones of the Wall are meant to specifically contrast the Jewish gravestones that were desecrated and used to pave roads during the Holocaust. Hope vs. Horror. The tattoo is actually a real number. When I was about to paint the number, I read an article by Regina Brett published in the Cleveland Jewish News that highlighted one man’s story. Brett wrote: ‘Holocaust survivor Jacob Hennenberg … found hope in the camps in the tattoo the Nazis engraved on his arm. The numbers 64242 added up to 18, which in Hebrew stands for “life.” Jacob decided that meant he would live.’ In honor of Mr. Hennenberg, I chose to use his number.